Tony Southgate’s first design for BRM was the BRM P153, a low monocoque cockpit with bulging sides that was a complete change to previous designs. This design returned the team to competitiveness with Pedro Rodriguez winning the Belgian GP.

There had been something of a revolution at BRM during 1969, with chief engineer Tony Rudd leaving, and Tony Southgate coming in from Eagle to take his place in charge of chassis design and development. Southgate designed an entirely new car for 1970, the P153, which followed his ideas at Eagle by having a very low centre of gravity. The fuel was concentrated around the centre of the car by means of a low tub monocoque with double-curvature sides that bulged out toward the back, a shape compared to a Coke bottle. Southgate was not the first to bring this shape to F1, Bernard Boyer’s 1969 championship-winning Matra MS80, having a very similar layout, but the P153 had a distinctly onion-shaped profile compared with the more cylindrical Matra. The car’s suspension was highly conventional with outboard springs all round, and the main radiator was in a standard wedge nose similar to the Surtees TS5 nose that had been used on John Surtees’ BRM P139 in 1969. Aubrey Woods’ heavily revised V12 engine was only partially stressed, so a triangular framework connected the back of the monocoque to the rear suspension/gearbox mounting plate. BRM continued to build its own gearboxes, and the P153 was fitted with a 5-speed P131 transmission designed by Alex Stokes, a Loyal BRM team member with 23 years’ service. The car sat on 13-inch wheels front and rear, with 10.5-inch diameter Girling brakes shrouded inside the wheels. The magnesium uprights were all new. Bodywork was produced by Specialised Mouldings Ltd.

John Surtees had left to set up his own F1 team, so BRM’s drivers for 1970 were Jackie Oliver, Pedro Rodriguez and George Eaton, the latter driving a third car at most races. The P153 was not especially reliable, due in no small part to issues with the engine oil system, but the power of the BRM V12 meant it was especially competitive on faster circuits and Rodriguez won the Belgian GP at Spa in June. He also took second place at Watkins Glen at the end of the season, having qualified in fourth, the best grid position the P153 achieved. 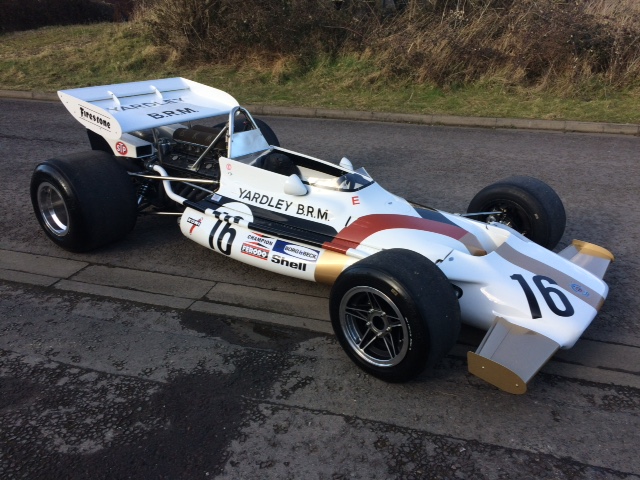 The P160 was clearly an improvement on previous models but the rest of the field had upgraded too, especially the new Lotus 72 which proved hard to beat. Jo Siffert did manage to do so in the Austrian Grand Prix scoring his first Grand Prix win since 1968. New signing Peter Gethin scored victory at Monza in only his second Grand Prix for BRM, they ended that year 2nd in the World Championship.

The team began the 1972 season with the BRM P160B featuring a 5-inch narrower monocoque, wide nose and the rear suspension intended for the P180. The car was upgraded to “C” specification by mid-season with new front suspension, gearbox and brake ducts from the new car and also improved the airflow to the rear wing.

Out of the 10 chassis made they had 121 Grand Prix starts racing from 1971 to 1974. Chassis #1 having 2 Grand Prix wins, the first with the talented Pedro Rodriguez at the wheel. Then again in September at the Italian Grand Prix driven Peter Gethin after Pedro Rodriquez sadly died while competing in a Ferrari during an Inter-series sports car race in Nuremberg, West Germany. Chassis #2 achieving 1 victory at the Austrian Grand Prix driven by Jo Siffert bearing the Yardley sponsors logo. For 1972, Southgate introduced the P180, which was still on the original design but had twin radiators mounted alongside the gearbox. There was little improvement or success so the team switched back to a further updated P160’s but again with a single victory at the Monaco Grand Prix for Jean-Pierre Beltoise as the best result. Following passing of Alfred Owen, the very much needed funds to develop a new car quickly dried up. BRM soldiered on with the P160 well into the 1974 season trying hard with no noted success.